Your account now works on all of our websites.

I recently learned there was a thing called deuterium depleted water (DDW). First, I asked “Whaat?” and then I asked “Why?”

The atoms of the most common isotope (99.99 percent) of hydrogen contain only one proton, one electron, and no neutrons. Deuterium is an isotope of hydrogen with one neutron and one proton in its nucleus.

There is also an extremely rare isotope, tritium, with one proton and two neutrons. It is radioactive and has been used as a radio-luminescent light source in watches and other devices. I have a keychain that a friend gave me with a tiny cylinder containing tritium; it glows in the dark so you can find your keys. I never lose my keys, so I don’t need it to find them. I appreciate it as a novelty item; I know any potential health risk from carrying it is negligible, and I’m not worried.

Deuterium accounts for 0.02 percent of the hydrogen in ocean water. Other water sources contain slightly different amounts. It is also known as heavy hydrogen, and water containing artificially increased concentrations of deuterium is known as heavy water. Heavy water can be produced by distillation and other methods. What’s left over is deuterium depleted water, or DDW.

Because the weight of regular hydrogen and deuterium differ slightly due to the additional neutron in deuterium, it’s not inconceivable that DDW could have some physiologic effects different from those of regular water. It might even be possible to measure tiny effects that are statistically significant. But it is inconceivable to me that those effects would be clinically significant.

You Can Buy DDW

Marketers never miss an opportunity. They have already jumped on the bandwagon. Lifewater is selling DDW you can drink to “optimize your cellular energy.” Drinking Lifewater “allows you to lower your body’s deuterium levels at your own pace and maintain the easiest most powerful anti-aging strategy that exists.” They tell us that deuterium disrupts the biological process of the mitochondria and prevents them from functioning properly. And it reduces our ability to make ATP, the main energy currency of the body. They don’t explain how they know this. You can’t produce your own DDW because it requires technology not achievable at home. So, you have to buy DDW prepared by others. There’s more than one brand, and the cost varies from $4–$20 per liter. To get an effect, it’s necessary to drink DDW for 45–90 days. They offer a saliva test so you can measure your deuterium levels before and after treatment. The saliva sample is sent away to be tested by the LGR Triple Isotopic Analyzer, and results are emailed to you in 5–10 days. They don’t mention the cost of testing, but I don’t imagine it is cheap.

There’s even a book: Defeating Cancer! The Biological Effect of Deuterium Depletion,  by Gbor Somlyai, a Hungarian biologist who switched from research to entrepreneurship and formed a company (not usually a good sign). 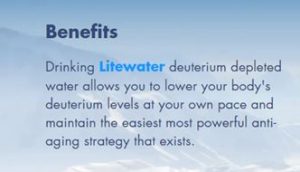 We are told, “when the Hunza people of northern Pakistan were investigated for their increased longevity and lack of illness it was determined that the deuterium content of their water, from the glaciers of Mt. Ultar, was about 133 ppm, a deviation of 16% from the 155 ppm global standard. A 16% reduction may not seem signiﬁcant, however, Grifﬁths’ theory further predicted that the adverse biological effect of deuterium is proportional to the square of the concentration. And that is the reason we now know that even a slight depletion of deuterium has a great biological beneﬁt. By the 1990’s pivotal research was being furthered in Romania and Hungary.”

Rather than blindly accepting the claims of those selling DDW, I went to PubMed to see for myself what research had been done. 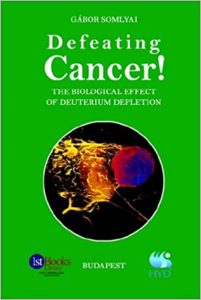 What Does PubMed Say?

An article published in Nature  in 1975 reported that oats grown in Antarctic water depleted in 18O and D relative to standard mean ocean water showed initial growth 1–2 weeks sooner than did oats grown in water containing greater 18O and D concentrations. The oats seemed to grow better in water that was most depleted in the stable isotopes throughout the growth period.

In 2004, a Romanian journal reported that mouse spleen cells grown in cell culture had a higher growth rate when the culture media was prepared with DDW compared to distilled water.

A 2019 study of human breast cancer cells grown in tissue culture found that DDW had an inhibitory effect on cell growth.

In another study, DDW was found to inhibit the proliferation and migration of nasopharyngeal cancer cells, in vitro.

Cell cultures and animal studies can be suggestive, but they don’t translate directly to human benefits and mustn’t be used to guide treatment. I found more rat studies, a rabbit study, cell culture studies, and even a study of the effects of an essential oil combined with DDW on sepsis-induced liver injuries in rats.

But What about Studies in Humans?

A Chinese study claimed that studies had demonstrated that drinking DDW caused growth arrest of malignant cells in cancer patients and significantly prolonged patient survival with also improved quality of life. I looked for those studies but didn’t find much. I found this uncontrolled study of 129 patients with brain metastases from lung cancer who drank DDW and got conventional chemotherapy and radiotherapy. The results are suspect because females survived three times as long as males. The only other human clinical study I found was a double-blind phase 2 trial in Hungary that found a greater decrease in prostate volume in prostate cancer patients randomized to drink DDW. They concluded that DDW “can act as a highly effective tool in cancer therapy,” a conclusion that goes way beyond the data.

Conclusion: Expensive Water, but What Does It Do?

Ninety days of drinking water that costs as much as $20 a liter? Before I spend that much, I need some answers:

I don’t see any good science-based evidence that would make me fear deuterium. I’ll stick to tap water, thank you. And after all, isn’t it NATURAL to have deuterium in the water?

Harriet Hall, MD, a retired Air Force physician and flight surgeon, writes and educates about pseudoscientific and so-called alternative medicine. She is a contributing editor and frequent contributor to the Skeptical Inquirer and contributes to the blog Science-Based Medicine. She is author of Women Aren’t Supposed to Fly: Memoirs of a Female Flight Surgeon and coauthor of the 2012 textbook Consumer Health: A Guide to Intelligent Decisions.

How Not To Do Science